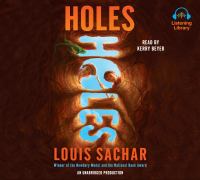 My teacher read this book. Super interesting. I loved it so much! So much action. At some parts, it got a little off on the topic but otherwise?.... AB-SU-LUTE-LY PERFECT-O!

I believe that Holes is an excellent book for readers of all ages, preferably younger if you love fast paced and adventurous plots. Stanley Yelnats is a fourteen year old boy who is convicted of a crime he did not commit and is sent to a Juvenile Corrections Facility Camp in the desert for eighteen months. I found the plot and characters in the book to be very interesting with many plot twists which lead to an intriguing adventure and surprises along the way. With very suspenseful moments and vivid language it allowed me to feel a connection with the characters. I have read this book multiple times primarily in elementary school and it was entertaining every time at different ages. I recommend this book to anyone who likes short and entertaining stories especially for younger readers who do not enjoy more advanced longer books. - Nicolas, 10

Holes by Louis Sachar is about a boy named Stanley Yelnats who is sent to Camp Green Lake to dig holes as punishment for his supposed theft. At the camp, Stanley quickly makes new friends At first glance, the book may seemingly appear dull as the title says holes. Holes are indeed in the story, but they serve a bigger meaning. Normally most books would have a single timeline but for Holes, it has three. Three different periods, which may seem confusing at first but is a great backstory for Stanley and others. I would give Holes a 10/10 as it seamlessly integrates three different stories into one while also incorporating history.

Holes is an award winning book written by Louis Sanchar. It is about a boy named Stanely, who was sent to juvenile camp after being falsely accused of theft. There, he has to dig holes in the hot desert, day after day, as reform work. Soon Stanely makes friends with a boy named Zero, and together they discover that they are actually being forced to dig to find treasure. They escape the camp and go on a long journey to gain freedom. I especially enjoyed this book because of all the plot twists. As soon as you think something is going to happen, the plot twists and takes a completely different path. `Sanchar whipped up an incredible tale in which Stanely ends up reforming for the better in a unique, unexpected way.

Everything about this book is terrific - the characters, villains, plot and subplots! The main character has flaws but can disobey scary bosses and risk his own life to save another; he can hold still for hours while deadly scorpions crawl over his body; he can carry a friend up a mountain. He 's a low key, likable kid who will even lie to his parents about reform school, telling them he's learning to swim and water ski, to save them from worrying.

I read this book to my three sons who are 6, 9, and 11 years old. We all loved it! It was a fun read that kept us intrigued. It made us laugh and it made me tear up a few times. I definitely recommend reading this book!

Holes is my all-time favourite book ever. Period. I love all the plots and twists. 5 stars.

this is my all time favorite book and will stay that way. the plot is just really good and the mystery about zero. best book ever.

The first hole's the worst.
No, the second.
Actually, the third.

Stanley is sent to a jail for "bad boys". He is forced to dig holes every single day exactly 5 feet wide and 5 feet deep. Stanley and his friends wonder why they are digging holes. It's all up to Stanley to dig up the truth.

What I like about this book is the humour and the great work of fiction. This book is very adventurous and exciting. I also like the amount of "cliff-hangers". It makes you really want to read the next chapter and so on. A next step is that make the summary on the back more exciting. Most people like me didn't really want to read the book at first (the back seems boring). However, the cover is very well done and looks very artistic! Well done Louis Sachar!

I really enjoyed how this book came together at the end. I did find some points a little tedious to get through but overall the story was very interesting.

I did find interest in this book at the beginning while I was reading it for a school-assignment,
but soon after the middle I kept losing concentration and becoming off track. I will admit it definitely does get boring at some points but overall it is a pretty good book.

Read this with my 9 yr old. Quite a good read for any age. Great characters, mystery, fantastic ending.

i like this book because it is intresting
Age: 9/12 can read this book .i give this book 5 star. I want borrow this book can u hold it for NoorZamir01

This modern classic novel is a must-read for children, teens and adults who enjoy a story that is darkly humorous and mysterious.

I loved this book! It was so easy to read and understand. The best part is the mysterious reason why the boys are forced to dig holes. It was sad when Zero revealed his mom's disappearance and the fact that they were forced into this camp. The happy ending is that the camp shut down for some kind of abuse.

A great story about a kid who has extremely bad luck. At times a laugh out loud journey and a happy ending.

This is a great book boiled down to its core. However it is very very slow in the beginning, for those who have no patience and just getting to the action, this isn't for you.

If you liked Wayside School, you will likely enjoy Holes. Sachar has a brand of humor that will draw the reader in. Holes is both funny and heart wrenching.

I found this book to be quite comical and a breath of fresh air. Stanley Yelnats and his crew never ceased to make me laugh or grow increasingly desperate for answers. I also realized that minor details were essential to a greater plot. I thought the ending was so satisfying and am sad that I’m done reading. It’s one of those books you don’t truly appreciate until you’ve finished it. @ThePageDweller of the Teen Review Board at the Hamilton Public Library

I really liked this book , I first read the book and watched the movie in 2014. I re read this book this year and it was great. The book deals with many important topics like racism arranged marriage and wrongful convictions. What I liked is when the characters who were mistreated finally got justice and a happy ending after working hard and being punished for things they didnt do. I would recommend this book to people of all ages because we can all relate to this book in our own ways -@nae1227211 of the Teen Review Board at the Hamilton Public Library

Holes was a book that I read in elementary school and one that I didn't personally enjoy but thought was interesting. Holes was more of an adventurous story than anything, with a theme in friendship and persistence. The reason that I thought Holes was interesting is because Stanley persisted in his time at camp green lake, and in his attempt to survive while dragging Hector alongside him. This was something that as an elementary school student, I did not relate too or understand which is why I thought it was interesting that he persisted so much despite his hard ships. The reason I did not personally enjoy it that much despite its themes and adventurous plot which shows the importance of history and fate is because I thought that the book dragged on too long and explained things unnecessarily. This not only made it time consuming but has made things feel quite boring, although that might be an intended part of the book. The reason that I mention that it might be an intended part of the book is that it does infact match the slow, tedious and boring life of a teen in camp green lake where they face a rough life which might help the reader "feel" the same as Stanley and the other teens whilst reading, thus helping them relate. Although my opinion is one of slight dislike, I do think that other teens or elementary school students should give it a go at least one time too see if they enjoy it. Rating: 4
@BookYourBooks of The Hamilton Public Library's Teen Review Board

This book is about bad boys. Or maybe kid who just happened to be in the wrong place at the wrong time. It’s not entirely a happy story but it easily sets the mood of this supposed camp that’s little better than a plein air jail. Boys are set to dig holes repeatedly because it builds character. But it doesn’t take a genius to realize that something else is afoot… The prose style is dry (pun intended) and straightforward. The story is not. Past and present alternate as we learn about the history of Green Lake, a dust bowl of arid temperatures where it hasn’t rained in over 100 years. Curses, spoken and unspoken, give this book an almost magical realistic feel. A doomed couple, a broken-hearted woman turned bandit, a gypsy woman whose last request went foolishly unfulfilled and a smelly-footed bandit provide the colorful backdrops for this story of buried treasure and beleaguered youth. Stanley, who’s overweight, loses pounds and gains toughness. Zero learns to read and the other boys learn to stick together. All of this is implied; the author is too canny to make his morals heavyweight or unsubtle. There are moments of humor, brutality, unfairness and cold dread—not exactly what you’d expect to find in a kid’s book. “Holes” is a short book but thoughtful literature for all that.

I love the interlocking past and present, the magic and curses, and the growing friendship between Stanley and Zero. It's a classic, folks!

A very interesting book, poor kids have to dig such big holes every day. . But it is a good book, I recommend it to people who like mystery.