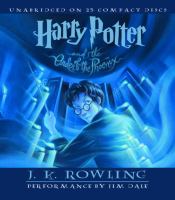 Harry Potter and the Order of the Phoenix

The most intense and emotional read so far. I can see a lot of topics being challenged here are reflected in real world culture. I think this is my favourite of the series.

Awesome, but it's sad that Harry's godfather, Sirius Black dies. Not going to lie, you kinda hate Bellatrix Lestrange after this.

In this book, the dementors make a comeback which causes Harry to use magic outside of school. Since he is a minor, it is prohibited for him to do so, so he awaits a hearing from the ministry. So many things in this book will make you want to throw it at a wall, but that's also why you can't stop reading. You're introduced to Dolores Umbridge, who in my opinion is the most irritating character. She is a pure-blood supremacist and is so unfair and rude to her students. Although, my favourite part of the whole book was when the trio created their own Defence Against the Dark Arts group to teach their peers and also learn. It was such a powerful move and made the book so much more interesting. @avacadojai of the Teen Review Board at the Hamilton Public Library

Harry Potter and the Order of the Phoenix is the 5th installment to the Harry Potter series written by J.K. Rowling. The threat of the evil Lord Voldemort has returned to the wizarding world. While the Ministry of Magic attempts to deny the return of this evil character to the wizarding world, a group of bad wizards gather together in secret to prepare for war. The Order of the Phoenix book explores some of the supporting characters such as Neville Longbottom, Luna Lovegood, and a new character that was introduced. The author did a great job of keeping the reader interested in the series and longing for more sequels. I would recommend this book to kids ages 11+ and give it a 4.5/5 @GymGirl of the Teen Review Board at the Hamilton Public Library

While quite a lengthy book in the series, I found it to be pretty amazing, as it finally explains many of what readers had been wondering from the beginning of the series. While there are some parts of the plot in which I believed were not as interesting to read or necessary to readers, the many other tension filling events that occur keeps readers anticipating what happens next. I believe that this book is meant for older audiences due to its length and some parts that young people may not understand - such as authority and laws and the impact that it may have on society. The novel, like the others in the series, is an entertaining story that will captivate readers. 4.5/5 @bookreviewer888 of the Hamilton Public Library Teen Review Board

J.K. Rowling did it once again! This book was amazing! I love how much Harry, Hermione, and Ron’s characters have developed, along with their relationships with one another. Rowling did a fantastic job of balancing humor, romance, action, and mystery within this novel! I am also amazed at how thoroughly she develops the characters, so that readers are able to deeply love or hate each person. This novel introduces Umbridge, who is definitely one of the most hated characters of the entire series! Once again, as Harry is older now, the plot is deeper and darker than the first three novels; however, it is so meaningful. I would definitely recommend this book to others – you will not be disappointed. @PenelopeScriptor of the Teen Review Board of the Hamilton Public Library

Order of the Phoenix is an extremely suspenseful and engaging novel, and one of my personal favorites from the Harry Potter series. A continuation from the previous installment of the series, The Goblet of Fire, Order of the Phoenix reveals a lot more information about the characters and their pasts and reveals some surprising truths. Additionally, the characters and the plot are very well written and make for an interesting read. Overall, it's an amazing and pivotal novel that helps set the stage for the upcoming books in the series.

This book is one of my favorite books of the series. I remember as soon as I grabbed it, I couldn’t put it down. This book is filled with so much humor, and emotion, it’s hard to believe that the author was able to do so good on a book. This book is a bit sad, but it is evened out with lots of happiness throughout. I absolutely loved how the author wrote this with so much depth and feeling. This book really prepares for what happens in the next books of the series. It also resolves the problems that rose in the earlier books. I really recommend this book to anyone. And if I could I would give this a 6 out of 5 starts, since its simply that good.

This is the book where some truth gets discovered and death of close ones of Harry die. But it was so deep and interesting I really liked it anyway!!!

I think this is one of the strongest Harry Potter books that really dives into the plot and the characters' mindsets, and this book sets up the final two books of the series. It gives me chills!

This one was great, and there was so much more depth and information than I had gotten from the movie. It was very angsty and dragged just a touch, but I still loved this entry, and the addition of Luna Lovegood was just as great as I thought it would be.

sophiaSHkim thinks this title is suitable for 10 years and over

maroon_hamster_90 thinks this title is suitable for 8 years and over

violet_cheetah_4096 thinks this title is suitable for 11 years and over

vaasu thinks this title is suitable for 10 years and over

blue_cat_13166 thinks this title is suitable for 11 years and over

reader123 thinks this title is suitable for 8 years and over

charlise2009 thinks this title is suitable for 8 years and over

Jkwon_7 thinks this title is suitable for 10 years and over

"Indeed, Professor McGonagall sank back in her chair at the staff table after a few feeble remonstrances and was clearly heard to express a regret that she couldn't run cheering after Umbridge herself because Peeves had borrowed her walking stick." - Harry Potter and the Order of the Phoenix

"I should explain that members of the Order of the Phoenix have more reliable methods of communicating than the fire in Dolores Umbridge's office." - Dumbledore

" . . . saying it looked to him as though Professor Marchbanks would shortly be meeting a round, dark, soggy stranger . . ." - Harry Potter and the Order of the Phoenix

"They found Montague, sir, he's turned up jammed inside a toilet on the fourth floor." - Malfoy

"Well, usually when a person shakes their head, they mean 'no.' So unless Miss Edgecomb is using a form of sign - language as yet unknown to humans - " - Professor McGonagall

"Daringly, Fred and George had put and enlargement charm on the front of The Quibbler and hung it on the wall, so that Harry's giant head gazed down upon the proceeding, ocasionally saying thing like "THE MINISTRY ARE MORONS" and "EAT DUNG, UMBRIDGE" in a booming voice." - Harry Potter and the Order of the Phoenix

"He dreamed that Neville and Professor Sprout were waltzing around the Room of Requirement while Professor McGonagall played the bagpipes." - Harry Potter and the Order of the Phoenix

"Doctors? Those Muggle nutters that cut people up? Nah, they're Healers." - Ron

""And it's Johnson, Johnson with the Quaffle; what a player that girl is, I've been saying it for years and she still won't go out with me - "
"JORDAN!"" - Harry Potter and the Order of the Phoenix

"Aha! I've had a tip - off that you are intending to place a massive order for Dungbombs!" - Filch

Frightening or Intense Scenes: there may be some scary and/or suspensfull parts where you don't know if Potter will live or die.....pretty good really

Other: this book will absorb you too good

Other: This book maybe too good for young readers

Dark times have come to Hogwarts. After the Dementors' attack on his cousin Dudley, Harry Potter knows that Voldemort will stop at nothing to find him. There are many who deny the Dark Lord's return, but Harry is not alone- a secret order gathers at Grimmauld Place to fight against the Dark forces. Harry must allow Professor Snape to teach him how to protect himself from Voldemort's savage assaults on his mind. But they are growing stronger by the day and Harry is running out of time. These new editions of the classic and internationally bestselling, multi-award-winning series feature instantly pick-up-able new jackets by Jonny Duddle, with huge child appeal, to bring Harry Potter to the next generation of readers. It's time to PASS THE MAGIC ON.

Harry Potter is spending another horrible summer with his dreadful Aunt Petunia and Uncle Vernon when a group of evil spirits called Dementors stage an unexpected attack on Harry and his cousin Dudley. After he uses magic to defend himself and Dudley, an act that later gets Harry expelled from Hogwarts, he is visited by a group of wizards and Madeye Moody and the is whisked off to number 12, Grimmauld Place, London. Number 12 is the home of Harry's godfather, Sirius Black, and the headquarters of the Order of the Phoenix. The Order is a group of witches and wizards, led by Hogwarts headmaster Albus Dumbledore, dedicated to fighting the evil Lord Voldemort and his followers. The Order is forced to operate in secrecy, outside of the jurisdiction of the Ministry of Magic, which is headed by the dense and corrupt Cornelius Fudge. Fudge refuses to believe that Lord Voldemort has returned. Harry, who witnessed Voldemort's return the previous June and was tortured and nearly murdered by him, is suffering from nightmares about what has happened to him. He is also angry with those he is close to, especially Ron and Hermione. Harry used magic to fight off the dementors, and since underage wizards are not permitted to use their wands outside of school, he must face a disciplinary hearing at the Ministry. With Dumbledore's help, Harry is cleared by the Wizengamot and permitted to return to Hogwarts School of Witchcraft and Wizardry