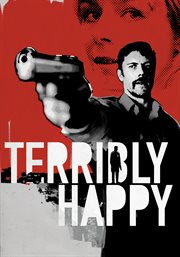 Robert Hanson is a Copenhagen police officer transferred to a small provincial town following his nervous breakdown. There to take on the mysteriously vacated Sheriff position, Hansen quickly finds himself in a community governed by its own bizarre rules. TERRIBLY HAPPY is a taunt, noirish psychological thriller about the depths to which people will go to achieve a sense of security and belonging.
Audience: Rated 14A
Publisher: [United States] : Oscilloscope Pictures : Made available through hoopla, 2010
Branch Call Number: E-VIDEO
eVideo hoopla

What is happening in this strange little town north of nowhere? All the corruptions of a large city fit tidily inside its borders. On a required transfer to consider his own flaws the new marshall in town manages to fit in with the rest of the local desperadoes after a timid beginning. Cold hard and comic.

Sloooww paced noir that had some intriguing elements: A Twin-Peak type of a town full of secrets, a new troubled marshal from a big city, a local wife beater thug, strange goings-on and a flirtatious damsel (Lena Christensen who also starred in "Lulu The Bankrobber's Wife" 2017.) It would be a very good noir if the killing, central to the film, was made more palatable, i.e. "more accidental" or realistic or subtle.

Neither as good as the best reviews make it nor as bad as the worst ones, this neo-noir fall squarely in the middle. There is a reason why so many cite the Coens: this picture simply wouldn't have been made without films like "Blood Simple" and "Fargo". But it is their inferior, lacking their audaciousness and their moral vision. In fact, its relentless pessimism becomes repetitious and seems somewhat sophomoric.The Scandinavian humor is also so bone-dry that it left this viewer parched. That said, the film does have some good qualities: it's atmospheric and well-cast. Worth seeing, if only to appreciate once again what the new (and the old) masters have accomplished with the genre.

Black as bad luck, but a brilliant film. WARNING: Don't watch it if you are depressed!

Yes, it is a slow-moving foreign movie...but oh if you have the patience, watch it. Slightly creepy, slightly funny, and then comes the ending. The tone is penultimately Scandinavian movie-making...dark, dank, blue-ish, grey-ish, stagnant, and seemingly unemotional. Also, the actor is a blond, Ben Affleck with better character acting skills.

This film was excellent! Top-notch directing, acting, cinematography...I could go on. I am so glad I picked it up at the library. I love foreign films and this one was fantastic. My favorite scene is when Robert and Jorgen start drinking in the bodega: shot after shot after beer after beer. I didn't know a bodega could be so menacing! I wish more people had sought this movie out at the theatre (and wished that it also got a wider release in theatres) because it is so deserving of a wide scope of viewing.

Excellent psycho drama. The ending will rip your head!!!!

Funny, the old marshal always came in for his beer around this time.
-I'm the new marshal, so I just want a soda.
===
Forget what I said about the bicycle dealer. About the bog.
-You didn't mention the bog.
===
She's nine.
- Does he beat her, too?
Not yet. She takes the baby carriage out for a stroll when...
===
This is all there is. There's nothing else. It's all mud, cows... and rubber boots.
===
Is it true Jørgen isn't Dorthes father?
-Whoa, where did you hear that?
I'm the police.
-Well, he's fathered at least seven of the other runts running around town.
Seven?
-I'm the doctor.

Tønder: the swamp, the cattle, the mud, the bog, the beast and the women:

Here, the earth rocks when you walk. The watertable's high here, you see. When it rains, the fields turn into a giant swamp. That's when the cattle sink in and have to be hauled out with chains. Once a cow sank so deep
into the mud, it vanished. Six months later it turned up again, inflated like a balloon. It gave birth to a two-headed calf with a calf's head and a human head. You've got to keep such a freak out of sight. Everyone knows that. Still, the farmer kept it. Soon after the cattle got mad cows disease - and the women lost their unborn children and their minds. The men gathered at the bar, - and one early morning they dumped the beast in the bog - where it sank with a wretched roar. Since then, there hasn't been any fuss with neither cattle nor women.