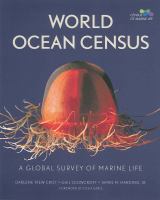 A Global Survey of Marine Life

"[A] distillation of a decade of exploration, magnificently illustrated and eloquently written. Some will treasure World Ocean Census as a valuable reference, others as a place to find white-knuckle adventures."

-- From the foreword by Sylvia Earle

An insider's description of the comprehensive Census of Marine Life and what it reveals about a seriously threatened ecosystem.

The Census of Marine Life was launched in 2000 with the goal of producing the first-ever ocean census by 2010. Two thousand scientists from 82 nations agreed to the mandate to answer three important questions:

What once lived in the global ocean? What is living there now? What will live there in the future?

With the census nearing completion, scientists around the world will inherit critical data that will be studied for decades to come. This data will be a basis for answering such simple questions as "What will become of sharks, whales, reefs and salmon?"

This book deals with the adventures and experiences of the Census of Marine Life and the process of gathering the data, revealing the stories behind the science. The authors detail the most fascinating findings and exciting discoveries -- the thrills encountered and the difficulties overcome -- all illustrated with fabulous images captured during the project's explorations.

The text readily engages the reader, and the photographs are as beautiful as they are accurate. The information is comprehensive, compelling and current, and it represents an enormous group effort by some of the world's leading scientists.

The organization of the book follows the three-part census mandate. Individual sections focus on a range of topics, from the logistics of the census to the space-age technology used to project the uncertain future of the world's oceans. The book is fully illustrated and provides informative captions and sidebars of data.

World Ocean Census is a unique record of a monumental global undertaking, worthy of a wide audience with a variety of interests.