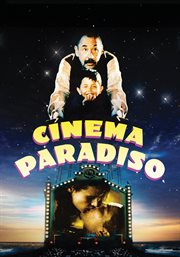 VERY GOOD 1988 Italian drama film written and directed by Giuseppe Tornatore. It won the Academy Award for Best Foreign Language Film at the 62nd Academy Awards.
Interesting plot as film producer flashes back and forth to different stages of his life/career. Quite a good view - and fine music by Ennio Morricone.

I hear this is a classic, but I couldn't get into it and didn't watch it all. Perhaps I will give it another try someday.

I remember when the movie first came out and hearing all this buzz about. However, I didn't see it until about 2008 or 2009. While watching the movie I was for the most part pleased. What sealed the deal for me was the ending because I felt a sense of closure. That was cool. When I watch a movie or television show, closure is not a primary concern. I like a good ending whether there is closure or not. I wasn't surprised by how it ended but wasn't expecting it either. Very pleased with the ending of this movie. Well played.

This is a wonderful comedy chock full of memorable scenes depicting the process of growing up in a small Sicilian town in the 1940s and 50s. It's about nostalgia and remembrance, and examines the question of whether one can ever go home again. It is blessed with perhaps the best ending ever in a movie. Warning: keep a handkerchief handy throughout.

Good, lyrical synopsis of a man's journey from small-town Sicily to the big city. Especially charming for its depiction of the local projectionist (who fills in for the boy's father, killed in WWII) and their relationship as he nurtures the boy's dream of film-making.

Originally released as a motion picture in 1988, over a decade before the DVD era. Back then, what teens did not love to hang out in cinemas and dream to be in the film business? Poignant lessons in perseverance, passion and growing up in Sicily during WWII An unforgettable G-rated movie for all ages.

One of my all time fav. movies-
bitter-sweet & nostalgic. A must see for those who love movies.

Glorious movie. One of the best movies ever made. Wonderful score by Morricone.

"Nuovo" only in being a remastered version of the original 170-minute director's cut. Sweet, nostalgic, worth watching again for the sheer joy of it!
Magnificent film score by Ennio Morricone, also the composer for Legend of 1900 and many others, and only now recognized with an Oscar.

Giuseppe Tornatore is a famous Italian film director of "Cinema Paradiso". The story takes place in a small Italian village. A small boy likes to go to the Cinema Paradisco to help the projectionist while the film is running. He learns to love movies and we watch him grow to a man. The story is touching and has a musical soundtrack that makes the images all the more real. In fact, you might be so taken away with the film that you think you smell the popcorn from the snack bar. (Actually there is no snack bar in the movie). The director was trying to tell us why he feel in love with movies and along the way we fall in love with his "Cinema Paradiso". One of Italy's finest films and truly essential viewing if you enjoy foreign films.
P.S. I agree with the others who commented the shorter version of the movie is the only one of the discs to watch.

You're young... the world is yours. And l'm old. l don't want to hear you talk anymore. l want to hear talk about you. Don't come back. Don't think about us. Don't look back. Don't write. Don't give in to nostalgia. Forget us all. lf you do and you come back, don't come see me. l won't let you in my house. Understand?
-Thank you. For everything you've done for me.
Whatever you end up doing, love it. The way you loved the projection booth... when you were a little squirt.
===
l've always been afraid to come back. And now, after all these years, l thought l was stronger... that l'd forgotten a lot of things. But in fact... l find l'm right back
where l was... as if l'd never been away. Yet when l look around, l don't recognize anyone. And you, Mama... l deserted you. Ran out on you like a bandit... without any explanation.
-l never asked for any. ... You were right to leave. You did what you wanted to do.

The bigger the man, the deeper his imprint. And if he loves, he suffers, knowing it's a dead-end street.
-That's nice, what you just said. But sad.
l didn't say it. lt was John Wayne in ''The Shepherd of the Hills.''
===
Let's sit down a minute. Misery of miseries. Once a king gave a feast.for the loveliest princesses in the realm. Now, a soldier who was standing guard... saw the king's daughter go by. ... Well, at last he succeeded in meeting her... and he told her he could no longer live without her. The princess was so taken by the depth of his feeling... that she said to the soldier... ''lf you can wait... for 100 days and 100 nights under my balcony... at the end of it, l shall be yours.'' With that, the soldier went and waited one day... two days, ... it was the 99th night... and the soldier stood up, took his chair... and left.
-What? At the end?
At the very end. And don't ask what it means. l don't know. lf you understand it, you tell me.

''A mob doesn't think. lt has a mind of its own.'' Spencer Tracy said that in ''Fury.''
===
lt means... that this isn't your real work. Right now the Paradiso needs you... and you need the Paradiso... but it's a stopgap. One day you'll go on... to other things. Things... that are more important. Definitely more important. l know. Now that l've lost my sight... l see better. Things l never saw before. All thanks to you, who saved my life. l won't forget it. And don't look like that. l'm not senile yet. Want proof?
-Yes.
Well, let's see. For example... right now, the film's out of focus. Go check.
-You're right, it's out of focus. How'd you know?
Too hard to explain. ...

When you laugh, you're even prettier.
-Salvatore, you're very sweet, and l like you very much... but l don't love you.
l don't care. l'll wait.
-What?
For you to fall in love with me. Now listen. Every night after work, l'll come stand outside your house. And l'll wait. Every night. When you change your mind, open your window. That's all. I'll understand.
===
You survived the theater fire, but from the Eternal Fire--
that is, Eternal Fire-- no one can save you.
===
At a party, a lieutenant pinches this girl's ass. She turns around. lt's the colonel's daughter. Terrified, the lieutenant says... ''lf your heart is as hard as what l just felt, l'm a dead man.''

You mustn't come here. l told you and told you-- like talking to a wall. lf the film catches fire... little as you are, you'll go up-- boom! ''And turn into a chunk of charcoal.'' Like to wag your tongue, eh? One day, l'll cut it off. Like that.
-Can l have it? Come on, can l have it? - Well, can l?
No! Deaf as a post! l have to splice it back before l return the film.
===
Living here day by day, you think it's the center of the world. You believe nothing will ever change. Then you leave: a year, two years. When you come back, everything's changed. The thread's broken. What you came to find isn't there. What was yours is gone. You have to go away for a long time... many years... before you can come back and find your people. The land where you were born. But now, no. It's not possible. Right now you're blinder than I am.
-Who said that? Gary Cooper? James Stewart? Henry Fonda? Eh?
No, Toto. Nobody said it. This time it's all me. Life isn't like in the movies. Life... is much harder.

cananpakel thinks this title is suitable for 16 years and over