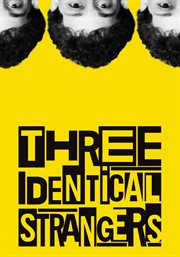 An incredible, true and awe-inspiring story of three brothers finding themselves and each other.

The ever intriguing question: which is more important to development of the human mind, nature or nuture? is partially answered in this documentary. Those who really like to dig deep on what shapes us as a person will enjoy this. I do think there was much information that was intentionally left out.

Its hard to believe the intricacies, themes, and tragedy in these three stories as they weave together. The documentary also provides a frightening look into psychological experiments that were once thought to be acceptable.

Great movie. There was more to the plot than I imagined. Take the time to watch this.

This is one of the most fascinating documentaries I've seen.

As I was watching this documentary I began to remember this story from my childhood and youth. The line on the box might cause you to raise your expectations for this a bit too high to thoroughly enjoy and one of the conclusions of their story is predictable - sadly - from a mile away. There are some questions raised that aren't answered and as a viewer you may or may not draw your own conclusions as the nature of these questions are a bit disturbing; that part of the film's billing is true.

We really enjoyed this! Pulls at heart strings and so intriguing. Can’t believe this isn’t a more well known story. I had never heard of it.

Great documentary filled with mystery and investigative reporting. I never knew about this story until after I watched this documentary, but I was kept on the edge of my seat throughout this whole film. At first it sounds like it would be the typical story of separated at birth but with unexpected twists this will keep you intrigued. If you love documentaries, then this is a must watch!

I liked this Biography Documentary DVD. It was comprehensive and informative. The astonishing true story of three men who make the chance discovery, at the age of nineteen, that they are identical triplets, separated at birth and adopted to different parents. The trio's joyous reunion in 1980 catapults them to fame but it also sets in motion a chain of events that unearths an extraordinary and disturbing secret that goes far beyond their own lives, a secret that goes to the very heart of all human behavior. A young man is told that he has to meet this guy who looks just like him - and it turns out to be his twin brother. When they story goes public, a third man reveals they aren't twins but triplets who'd been separated at birth. Shocked by the discovery and stunned by the similarities in their lives, the brothers learn more about their incredible history - which also proves to be darker than any of them were expecting. This is definitely a documentary you need to see to believe.

In terms of how they parented their children the three families were quite, quite different. David's father stood out. There was nobody in the world like his son. He was so proud of him. Whatever he did was wonderful. Bobby's father was very busy as a doctor and didn't have the time to be with Bobby that David's father had, but was as devoted to him as possible. The most traditional was Eddy's father... who was rather strict. He was the boss. He made the rules and Eddy was supposed to follow.

I... It's not justifiable what they did. You know what? Coming from the Holocaust, our family has a knowledge that when you play with humans... you do something very wrong.
===
Being in business with my brothers damaged our relationship. There were conflicting work ethics, and my father had passed away. He really anchored us together as a group and kept the peace so to speak,
-They started to argue like kids would argue, you know. And they didn't have that opportunity, that gift of being able to be brothers for 18 years. When you are living in a family of children you learn how to adjust to each other. If I don't like the way you do this, I can get angry, or I can learn to compromise. But they met as adults. And had never learned how to live with each other.

We found the ways that we were alike and we emphasized them and we wanted to be alike. We were falling in love with each other. I think there were superficialities. They liked the same things and they had similar interests, but deep down they were different. They were not a case study of biology being destiny. I've come to believe genes and the environment are close competitors. You could say that we drift in the direction that our genes tell us to go but it doesn't mean you are destined to be one person or another. I believe that I'm still here today because of the foundation that was given to me by my parents. I believe that absolutely made a difference in terms of struggling with whatever demons I struggle with. I believe nature and nurture both matter. But I think nurture can overcome nearly everything.